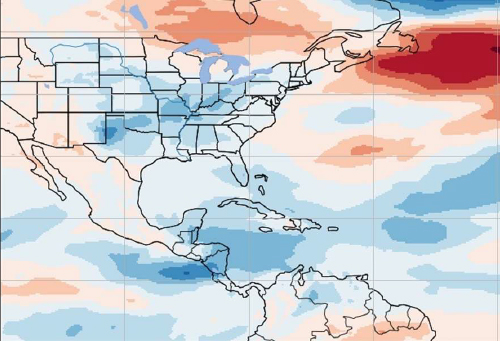 The numbers have been revised based on processing of atmospheric and oceanic data for the month of May. The previous forecast from last month forecasted 16 named storms, 8 hurricanes, 4 major hurricanes and an ACE of 150.

Skyfora’s artificial-intelligence-based seasonal forecast is based on a state-of-the-art spatiotemporal machine learning modeling framework using advanced feature extraction methods. The method is thus ”data-driven” and takes into account both the spatial distribution and the time evolution of key oceanic and atmospheric variables, comparing them to corresponding patterns found in historical data.

Key predicting variables behind the forecast for an active season are higher than average temperatures in the subtropical Atlantic Ocean and in the Caribbean, both of which show a warming trend while moving into the official hurricane season that commenced on June 1st. (One named storm, tropical Storm Ana already formed and dissipated before the official start of the season.) A further key predictor is the neutral state of El Niño Southern Oscillation. Its most likely time evolution is to stay in a neutral state with a negative La Niña state conducive for hurricane activity being more likely later in the season.

While most parts of the Main Development Region comprising tropical Atlantic and Caribbean ocean areas at latitudes 10-20 degrees North feature sea surface temperatures close to or even below the 1950-2020 climatological average, this pattern in May is sufficient for an active season based on historical data. This, however introduces uncertainty into the forecast in case the Region does not warm as the season progresses. The warm anomaly further north is, nevertheless, a more significant statistical predictor of hurricane activity. Of atmospheric variables, e.g. weaker than usual trade winds in the tropical Atlantic off the west coast of Africa are a predictor of an active season. Furthermore, beyond the variables of spring 2021, a full decade of exceptionally warm waters throughout the tropical and subtropical Atlantic are a statistical predictor of an active season with a high likelihood, with the physical mechanism likely to involve excess heat stored in the subsurface ocean. 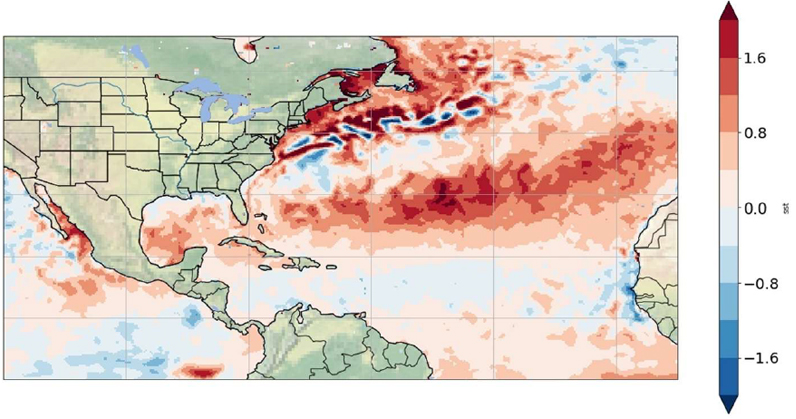 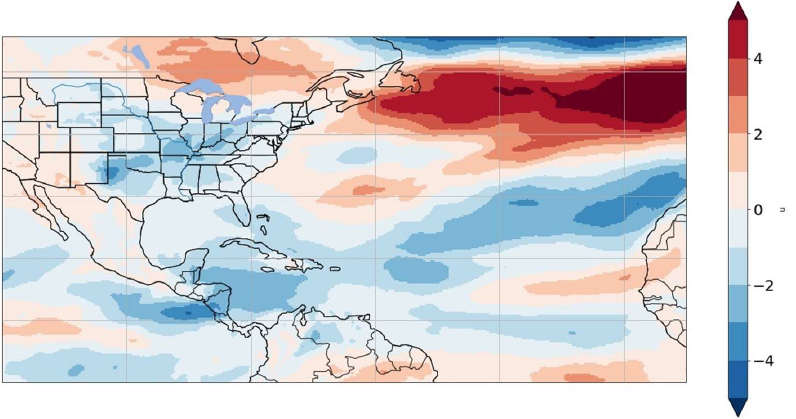 Figure 2. May 2021 Zonal wind (west-to-east) deviation from 1950-2020 climatological average. Weaker than average trade winds off the west coast of Africa are a predictor of hurricane activity.

Forecast uncertainty remains large as for seasonal forecasting in general. An inactive 2021 is much less likely than usual, but cannot be fully excluded based on the data available at the time of forecast. A very active season has somewhat higher probability than usual, but nevertheless still remains in the ’long tail’ of unlikely events in the probability density function. The real advantage of the machine learning framework comes from using the extracted features to constrain and narrow the probability density functions of different hurricane activity variables, including more regional hurricane parameters as well as typhoon parameters in the West Pacific. Skyfora is currently working on integration of these probabilistic estimates into catastrophe models.